Star Wars, Blu-Ray and a Boycott 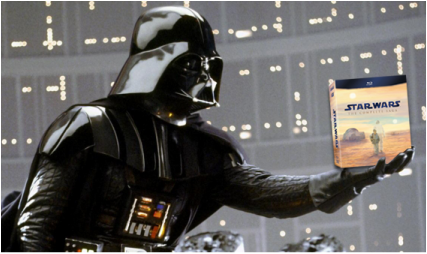 ​Why did so many fans boycott the Blu-Ray release of the Star Wars saga?
​By Amy Green, September 2011

As most everyone knows, the Blu-Ray version of the Star Wars Saga will be released in 6 days. Many people have recently canceled their pre-orders now that the disc contents are known. The news is abuzz about the widespread outcry, especially against one particular change: Darth Vader now saying “No!” twice as he throws the emperor to his death in the climactic scene of Return of the Jedi  (watch video). While that is proving to be the final straw for many people in their decision not to purchase this set (as one blogger eloquently explains in this post ) it is certainly not the only issue with this release. There are many other technical and aesthetic issues . This has led to a movement to boycott this release.

The Amazon product page is the site of a heated debate . It is being deluged with angry 1-star reviews by people boycotting the release, accompanied by retorts from some people posting 5-star reviews in support of the Blu-Ray release and expressing disdain toward those who are complaining about it. These people for the most part feel that the complaints are nitpicky and not worthy of serious consideration. However, I believe they are worthy of serious consideration.

There are two main problems people have with this Blu-Ray release:

First, people are being asked to pay $90 for a product that has myriad technical flaws, things that should have been corrected regardless of what movie it is. These are a distraction and shoddy workmanship.

Second, changes are continually being made to the substance of the movies without offering the originals. Many movies get doctored by their directors. But when this is done, it should be and usually is done concurrently with a careful restoration and release of the original version in the best possible quality. But in this case it’s not. And that is what the boycott, and this article, is mostly about.

The owner of SaveStarWars.com makes an excellent point about this: "…none of this would be an issue if the originals—and the previous special editions, for those now crossing over—were available in high definition. We could just shake our heads at Lucas when we thought he made a stupid decision, say “well, I wouldn’t have done that,” and then watched the version we liked, whether it was the original theatrical version, or the 1997 version, or the ones from 2004 and 2011. It wouldn’t matter if we liked a change or not, or which version was “right”, we could just agree to disagree and be happy with the version that Lucas gave us that spoke to us the most. The way every other film with multiple versions—Blade Runner, Alien, Lord of the Rings, Close Encounters, etc—has been treated. Lucas is so narcissistic about suppressing the older and original versions of the films, as though they no longer exist, that he has brought the heat on himself. And, unfortunately, he has opened up a lot of rifts in the fan community that really should not exist in the first place. We all love Star Wars, but it has so many versions, sequels and permutations that it is inevitable that we all never agree on one single, absolute Gospel canon the way Lucas wants: there’s too much radical variation. The only way things will be good is if we can each have the one we fell in love with, because we all fell in love with different variations at different years for different reasons. When you create something as big as Star Wars, you sort of have an ethical mandate to do this, to protect a cultural artifact and make sure it is seen and treated with respect. As Lucas himself said : “American works of art belong to the public; they are part of our cultural history.” I hope one day Lucas can drink his own medicine so we can all just get along."

Some 5-star reviewers have pointed out that when one starts focusing on the minute details of something it’s hard to concurrently enjoy it. True indeed, and yes, the point of a movie is to ‘get lost’ in it and to ‘enjoy the story’—and that actually is a reason not to change something that is already beloved the world over. When changes are made to a story you already love so much and know very well, these changes hinder you from getting lost in it or enjoying it as much, because they surprise you.
​
One reviewer wrote: “I just love to watch movies for their stories, sure effects are great, but seriously, a movie like Star Wars can get by on just a great story.” I agree, and that’s why I fell in love with them too: the story. And I am pretty sure that’s why all the so-called nitpicking “nerds” love Star Wars too — why else would the original trilogy stand the test of time even though its special effects are quite lacking by today’s standards? Why else would little kids seeing the originals today still fall in love with them despite their outdatedness? I wish George Lucas would remember that the story and the characters are what people care about more than the special effects; then maybe he wouldn’t have felt the need to change the story or add more special effects.

The main defense of the Blu-Ray release is that Lucas can do whatever he wants because they are “his” movies. Lucas himself takes this view. But Lucas didn’t write or direct two thirds of the original trilogy, so to call it “his” is literally inaccurate even though, because of our flawed copyright laws, it’s legally accurate. But beyond the question of whether he can is the question of whether he should. Lucas himself has spoken out vehemently in the past against tampering with classic movies:

"People who alter or destroy works of art and our cultural heritage for profit or as an exercise of power are barbarians, and if the laws of the United States continue to condone this behavior, history will surely classify us as a barbaric society. In the future it will become even easier for old negatives to become lost and be “replaced” by new altered negatives. This would be a great loss to our society. Our cultural history must not be allowed to be rewritten. Attention should be paid to this question of our soul, and not simply to accounting procedures. Attention should be paid to the interest of those who are yet unborn, who should be able to see this generation as it saw itself, and the past generation as it saw itself."  -George Lucas’s 1988 speech to the U.S. Congress

Later he revised his view to exempt himself from his own ethical standards:

​And his view now? When Lucas was asked why no originals, he purportedly rolled his eyes and said, “Grow up. These are my movies, not yours.” (Full story here.)

Some people have the impression that the desire to preserve original films is unreasonable and/or just a weak peep from a small minority of over-the-hill geeks, but it’s the stance taken by the AFI, the National Film Registry (which Lucas had a big hand in creating), the Film Foundation (Lucas is on the Board of Directors) and the Library of Congress. It is a widely recognized principle and one that Lucas is a huge supporter of, even, so he says, with regard to Star Wars. “Lucas, a proponent of film preservation, has said recently that he would like to restore the originals but can’t pay for it, even though he is a billionaire. Yet when an outside organization from the federal government bodies of film preservation [National Film Registry] offer to foot the bill in the meantime, what does Lucas do? Try to get them to take the Special Edition,” which the NFR refused to do. ( Full story here .) The Guardian wrote about this principle here with regard to the Star Wars Blu-Ray release. So it’s not just a closet idea… and clearly money is not the true reason Lucas doesn’t want the originals released.
​
The fact that Lucas continually makes changes to the Star Wars movies while not preserving the originals for viewing, frankly is reprehensible both as an artist and as a businessman, regardless of whether one feels the movie was actually ‘improved upon.’  What would the reaction be if the Tower of Pisa were straightened, or Mona Lisa’s face touched up to smile a little more, or Mickey was given brown fur, or countless other famous and beloved historical icons were tampered with beyond mere maintenance, either by their creators or by others? Star Wars was nominated for 11 Academy Awards in 1977 and won 7 of them, and the Star Wars saga is beloved the world over. As the most successful film series in all of film history, Star Wars is a historical treasure and global icon that should be treated with the same respect that it and those who love it deserve.